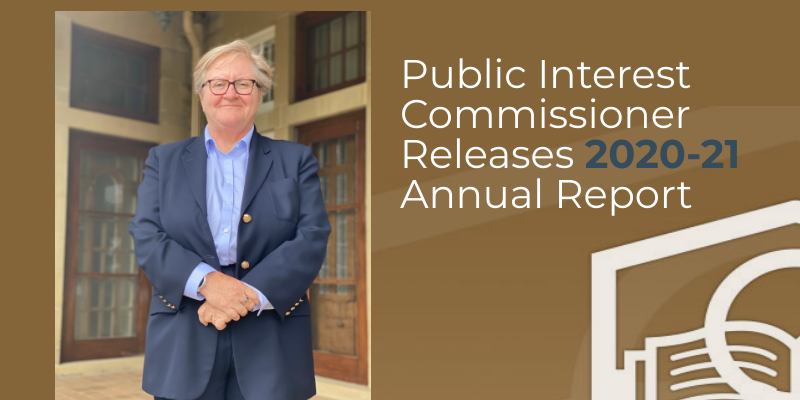 Edmonton – On November 4, 2021, the 8th annual report generated by the office since it opened in 2013 was tabled in the Alberta Legislature. 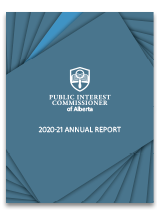 Under the Public Interest Disclosure (Whistleblower Protection) Act, the Public Interest Commissioner has the authority to investigate disclosures of wrongdoing and complaints of reprisals from public sector employees. The Commissioner reports annually on the function of office, including general information about our work, business outcomes, statistics, and ongoing investigations.

Message from the Public Interest Commissioner

There is no doubt, 2020-21 was an extraordinary year for Albertans. As the COVID-19 pandemic took hold, public health restrictions caused wholesale changes to our way of life. Like many other organizations, we temporarily closed our offices and cancelled in-person meetings and events. We transitioned to remote workplaces and deployed the bulk of our operational and investigative work to an online environment. While COVID-19 lingers as a very serious health concern, we remain steadfast in delivering on our legislated commitments. My staff continue to lead quality public interest investigations which contribute positively to maintaining an integrity-based public sector where employees have a clear process for reporting wrongdoing.

As an independent office of the Alberta Legislative Assembly, my office’s primary responsibility is to investigate allegations of wrongdoing and complaints of reprisal under the Public Interest Disclosure (Whistleblower Protection) Act (the Act). By taking advantage of the protection provisions outlined in the Act, public sector employees are supported in bringing forward matters they believe to be unlawful, dangerous, or injurious to the public interest.

In 2020-21, our office received 164 cases across a wide range of issues. While the total number of cases received declined from 2019-20, we noted a rise in the number of complex and concerning issues raised to our office. As a result, we commenced 12 large-scale investigations this year, many of which are still underway at the time of this writing.

This past fiscal year, our office addressed allegations of wrongdoing by an official said to be illegitimately obtaining government funding; claims of gross mismanagement of the delivery of a public service by a poorly performing senior executive; a complaint of reprisal accusing government of bias within a procurement process; allegations of systemic bullying affecting the overall culture of the workplace; and claims a senior executive used company equipment to commit an inappropriate and unlawful act. Many of the points of contact with our office also included requests for advice on whistleblower protection policy, non-jurisdictional complaints we were able to refer to a more appropriate agency, concerns about the administration of COVID-19 restrictions and questions from the media.

It remains my belief that a major constraint impacting the effectiveness of the Act is that the complaint, analysis, and investigative processes are not readily understood and recognized for the protection they bring to public sector employees who would like to report wrongdoing. Experience now generates an increased level of reassurance of anonymity to potential whistleblowers because after almost eight years, no whistleblower bringing a complaint to our office has been identified without their consent. Further, to date, we have not found that any employee has suffered reprisal when they used the Act as the mechanism to report wrongdoing. This may be attributed to the deterrent factor as the result of the severe consequences associated with committing reprisal action against a whistleblower. Another possible contributing factor to the upswing in serious allegations is publicity the office received as a result of significant findings reported in the news, particularly the release of the Alberta Energy Regulator (AER) investigation in late 2019. In this report, we cover subsequent investigations into the actions of other employees at the AER.

More recently, significant attention has been generated by news stories surrounding the scheduled review of the Act by the Standing Committee on Resource Stewardship. As administrator of the Act, I was invited to provide the committee advice and make available the expertise of my office. As part of the process, we conducted our own jurisdictional review and submitted a list of 22 recommendations for potential amendments to the Act. A full description of my office’s role in this capacity can be found on page 8. While the review generated public debate in the media, I am grateful to everyone who participated in the process. The best possible revisions to the Act will result from a free exchange of ideas where stakeholders’ points of view are welcomed and expressed.

As I embark on my final year of this appointment, I would like to remind and encourage those who believe wrongdoing to be occurring in their organization to come forward with their concerns. Whistleblowers often have the best vantage point for understanding what is truly going on and by casting the situation into the light, they perform a public service at the highest level. Wrongdoing can result in the misuse of public funds, risk harm to an organization’s reputation and disrupt harmony in the workplace. My office is available to Alberta’s public sector employees who wish to disclose wrongdoing or to simply seek advice about the Act.

This year has been extraordinary, and while we continue to act with caution and ensure strict preventative measures are in place against COVID-19, I am proud to see our service levels remain high. I would like to conclude by thanking my staff for their enduring dedication and commitment to serving Albertans to our utmost capacity.